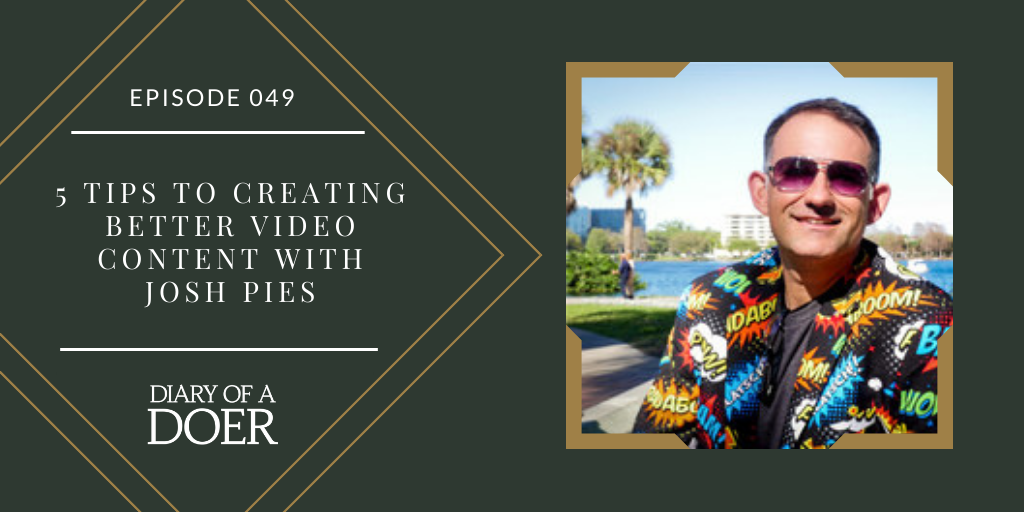 Video is king in media consumption, so it’s important we do it right. Josh Pies, Executive Producer of C47 Film Associates, joins me today to talk video marketing, and 5 things each of us could do right now to get better at it.

Josh is an award-winning film and TV producer slash director who moonlights as an advertising creative director and business strategist and speaker. He has produced a feature film available on Amazon Prime, three TV series, 8 documentaries, and TV and web ads for Kodak, the John Maxwell Team and the US Department of Labor.

In this episode, you’ll hear about Josh’s character theory, and why you’ll always catch him in a “loud” sport coat on stage.

He also debunks what brands and entrepreneurs get wrong when it comes to video. For starters, he says brands too often create video to sell, when they should be using it to build relationships.

“You can’t build a relationship with an audience with your hand out. You should always have an ask, but the ask should be for more relationship.”

On the flip side, for those who shy away from more direct calls to action, Josh advises planning your asks in advance.

Lastly, Josh walks us through 5 keys to owning your online influence through video and — spoiler alert — they’re much easier than you think.

Have you subscribed to my podcast? If the answer is no, I’d love for you to subscribe. Diary of a Doer is full of stories of business, some behind the scenes, and freaking amazing guests.

If you’re feeling realllly generous, I’d love for you to give me a review over on iTunes. Simply select “Ratings and Reviews” and “Write a Review” then a quick line with your favorite part of the episode. It only takes a second and it helps me out a ton!

If you like this podcast and are thinking of creating your own, consider talking to my producer, Danny Ozment.

Find out more at https://emeraldcitypro.com

← Episode 048: How I Battle My Fear of Public Speaking Episode 050: 4 Small Actions That Create Big Momentum →

Sign up below to receive new podcast
episodes in your inbox.