Episode 031: Life After Prison: Offering Entrepreneurship as a Second Chance with Coss Marte 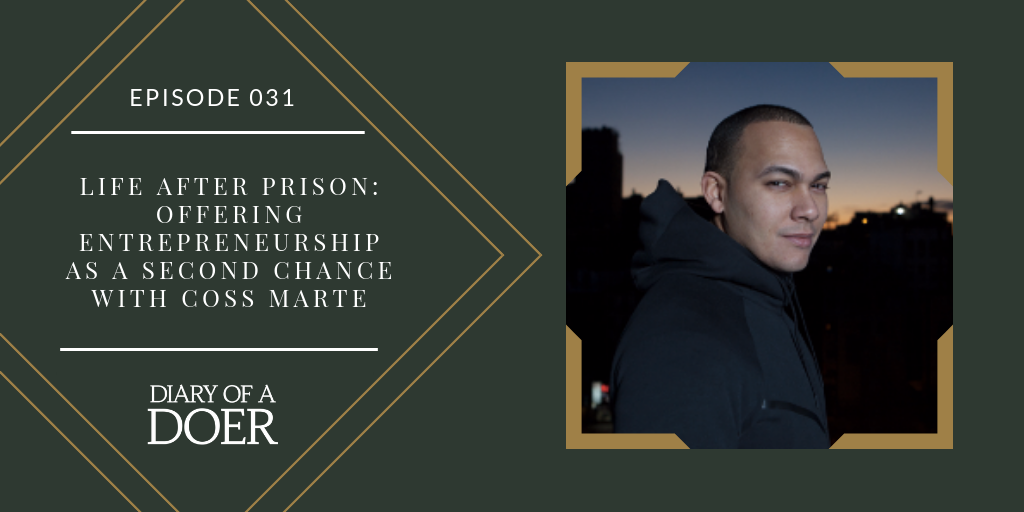 Today’s guest on Diary of a Doer is proof that everyone is capable of redemption. Coss Marte, a former drug kingpin, joins us as CEO/founder of ConBody, a New York City-based fitness company.

ConBody helps people get into shape, but also employs the formerly incarcerated. Coss came up with the business idea while in solitary confinement. He has been featured everywhere from Good Morning America to Forbes, and given TED Talks in China and Houston.

In this episode, you’ll hear how a prison doctor’s diagnosis motivated Coss to start exercising, and how he helped 20 other inmates lose a combined 1,000 pounds.

“I started writing down all my workout routines, and it came like a lightbulb. ‘This is what I wanna do,’” says Coss.

Coss shares how, like many former inmates, he struggled to re-enter the workforce. But with consistency and determination, launched his business.

“I started doing it in the park with no money. I just made it happen,” he says.

In this episode, Coss also shares why companies are missing out by not hiring the formerly incarcerated, and how he still fights stigma.

“I think it’s embedded in people’s brain that we’re not smart, we’re uneducated and we’re gonna f— up,” he says.

Coss also shares his definition of success, and why it’s important to him to keep visiting prisons.

Have you subscribed to my podcast? If the answer is no, I’d love for you to subscribe. Diary of a Doer is full of stories of business, some behind the scenes, and freaking amazing guests.

If you’re feeling realllly generous, I’d love for you to give me a review over on iTunes. Simply select “Ratings and Reviews” and “Write a Review” then a quick line with your favorite part of the episode. It only takes a second and it helps me out a ton!

If you like this podcast and are thinking of creating your own, consider talking to my producer, Danny Ozment.

Find out more at https://emeraldcitypro.com

← Episode 030: Surviving Summer With Kids Episode 032: The Four Types of Business Owners And The Teams They Need Around Them →

Sign up below to receive new podcast
episodes in your inbox.